Because we aren't all sunshine and rainbows

From time to time I will encounter something in game that will necessitate me petitioning Blizzard for help via there in-game help system.  I would say out of the 20 or so times I’ve had to submit a ticket that I’ve only actually been contacted by a GM four or five times.  I don’t remember the specifics of each incident so I can’t say if one issue gets a response more often or quicker than another.  I do know that any response I’ve received has come hours and hours later.  But that’s not really what this post is about.  While it may be obnoxious that replies come eons after submitting the ticket, I really appreciate that the GMs are always nice, professional, and at least in my experience, have a really great sense of humor.

The first few times I submitted a ticket it was all business.  They asked me what the issue was, I told them, they did what they could to resolve it, we moved on with our lives.  But on one particular occasion I was in a very strange mood when the GM finally contacted me; I talked to them entirely in Ebonics.  I really appreciated that the GM I was talking to was willing to play along a little.  She didn’t ask me to stop acting like an idiot or anything and was fully capable of understanding what I was saying.  But the best part was at the end where the following exchange took place (note, this has been paraphrased):

Me:  Yo yo word! Thank y’all fo’ hepin me get this wack shiz dealt wit yo!

GM: You are more than welcome. It was my pleasure.

Maybe I’m the only one who finds this amusing, but I thought it was hilarious.  Recently I had another exchange with a GM after reporting an account scammer, and I found it amusing enough to take a screen shot of so I could share it with you lovely folks.  Behold my terrible picnik photo editing skills! 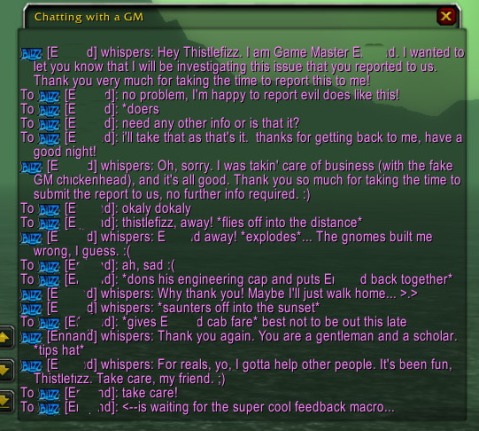 I just really appreciated that they were willing to play along.  So, say what you will, but in my opinion and experience, Blizzard’s customer service has been really good.  They seem to take a genuine interest in their customers and their issues, and for the most part do a great job of responding to feedback about problems or unbalanced features in the game.  I’m sure there are plenty of people that haven’t had such great experiences with them, and you are more than welcome to tell me about it in the comments section, just keep things civil.  If you’ve had good experiences, I would love hearing those too!

§ One Response to Customer Service

Leave a reply here, but remember, be coherent! Cancel reply

You are currently reading Customer Service at The Cranky Old Gnome.